The wireless serial port module is a module that communicates serial port data through wireless signals. Generally consists of a radio frequency chip and an MCU (some SOC chips have integrated these two parts together). The wireless serial port module has the characteristics of simple operation and is widely used in wireless data acquisition, wireless meter reading, robot control, access control systems, security systems and other fields. Users only need to understand simple serial communication, and they can easily learn complex wireless communication Realize the development and use of wireless products. 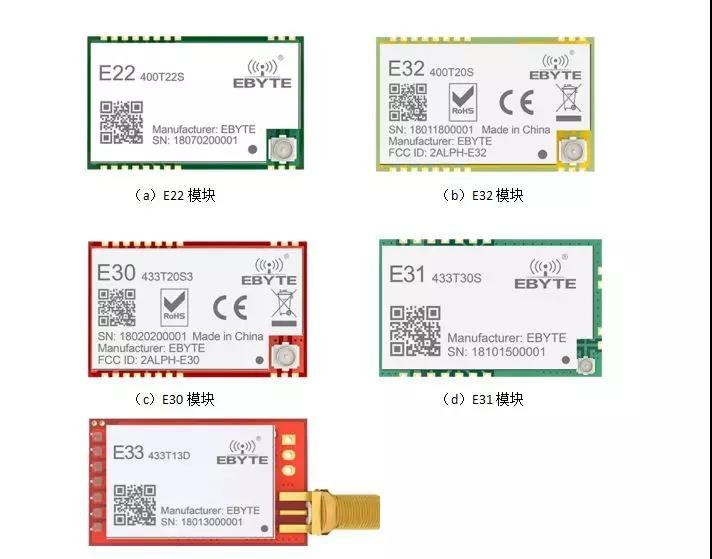 All the above modules can be configured with baud rate, air speed, module address, frequency channel and other information by the user's host computer provided on the official website, providing users with more flexible operation methods.

Working in the 433MHz frequency band; the module integrates the host (coordinator) and the terminal into one, with two transmission modes of long distance and high speed. One host (coordinator) supports up to 200 nodes to communicate with it. The instructions greatly simplify user operations and are applicable to multiple wireless communication networking scenarios.

E70-433NW30S is the first 433MHz wireless module in China that can support 200 nodes concurrently, which solves a series of problems caused by traditional 433MHz wireless data transmission cannot be concurrent. After concurrency, users no longer need to spend energy on processing complex networking protocols, which greatly reduces the development difficulty of customers and shortens the development cycle of users; its protocol guarantees the stability and packet rate of the entire wireless communication system.

In a star topology, each node in the network is connected to a central node in a point-to-point manner, and the central node transmits information to the destination node.

1. For any two nodes in the star network to communicate, they must be controlled by a central node. Therefore, the main functions of the central node are three:

(1) After a communication request is sent from a station that requires communication, the controller checks whether the central node has an idle path and whether the called device is idle, so as to determine whether the physical connection between the two parties can be established;

(2) This channel should be maintained during the communication between the two devices to ensure the reliability of data transmission;

(3) When communication is completed or unsuccessful requires disconnection, the central transfer station shall be able to dismantle the above channels.

Compared with a ring network, the failure of a star network will cause the entire network to be paralyzed and it is more difficult to locate branch node faults. The star network is convenient for centralized control because the communication between terminal nodes must go through the center node. Because of this feature, it also brings advantages such as easy maintenance and safety. When the end node equipment is down due to a failure, it will not affect the communication between other end users. The network delay time is small, and the reliability of the system is high.

2.The main advantages of star topology are:

(2) Node expansion, simple structure, and convenient movement. Compared with other network topologies, star topology management and maintenance are easy. When a node is expanded, it is only necessary to establish a connection with the central node device, and it will not “take the whole world” like a ring network.

Because the star network has the above advantages, it has become one of the most widely used network topology designs in the networking mode, but how to avoid communication conflicts among multiple nodes in the star network becomes the most important problem.

In the star topology, in order to effectively avoid communication conflicts between the nodes, the central node and the terminal node interact mainly in the following two common ways, one is the active polling method, and the other is the passive time slice method.

(1) Terminal nodes are not restricted by time slices and are more free;

(2) When the terminal node and the central node interact infrequently, there is theoretically no requirement for the length and time of the transmitted data;

(3) The network stability is high. The passive time slice method has high requirements on the crystal consistency of each node, and the active polling method will not affect the communication of each node due to the small deviation of the crystal;

(4) The program structure is more simple and clear than the passive time slice method, and easy to understand;

(2) Since the terminal node does not have the function of actively sending data, it must send the data only after being inquired by the central node. Therefore, terminal nodes that have not been polled cannot immediately send data even if they have data.

Passive time slice means that the central node will periodically synchronize the time of all terminal nodes in the network. A terminal node wants to send data only within its own time slice and cannot be longer than the time allocated by the system. It is necessary to ensure that tasks are executed To be able to enter the task to be executed,

(1) The communication efficiency of the passive time slice method is higher, which saves the time required for the central node to poll in the active polling method. Since the active polling method requires the central node to sequentially query whether the terminal node has data to send according to the ID number of the terminal node in order to ensure that the data of each node will not conflict and ensure the reliability of the network, the query process is There is no valid data for interaction. From the perspective of data transmission, the query time is "invalid".

(2) The time slice of each terminal node can be set, which is more flexible;

(3) Due to the time slice mechanism, each terminal node is independent of each other, making data interaction more orderly;

(3) The data of each terminal node can only be sent in its own time slice. If the data is not sent within the specified time slice, it can only wait until the next time to continue sending.