The E28 series is a 2.4GHz RF transceiver module designed and manufactured by Chengdu Ebyte Electronic Technology Co., Ltd., with long communication distance; it has extremely low power consumption in low power mode. This series comes with a high performance PCB onboard antenna. 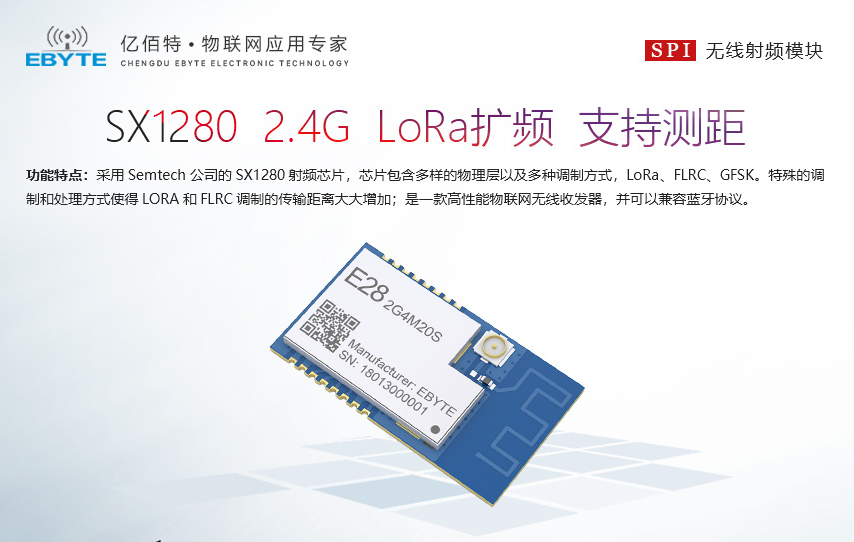 Features: Adopted Semtech's SX1280 RF chip, the chip contains a variety of physical layers and a variety of modulation methods, LoRa, FLRC, GFSK. Special modulation and processing methods make the transmission distance of LoRa and FLRC modulation greatly increased; it is a high-performance IoT wireless transceiver and is compatible with the Bluetooth protocol.

The method is a two-way ranging technique that uses the time of flight of a data signal between a pair of transceivers to measure the distance between two points. The time interval between transmitting the data signal from the transmitting end and receiving the response signal from the receiving end is recorded as Tt, and the time interval at which the receiving end receives the data signal of the transmitting end and the response signal is recorded as Tr, as shown in the following figure. The one-way time of flight Tf = (Tt - Tr) / 2 between the pair of transceivers, the distance d = c * Tf between the two points, where c represents the electromagnetic wave propagation speed.

Then is the SX1280 ranging function details:

The ranging function of the SX1280 is based on measuring the round-trip flight time between a pair of SX1280 transceivers. This process USES the LoRa modulation scheme, enabling ranging to benefit from all the advantages of LoRa's long distance and low power operation. The basic ranging operation is shown in the figure below:

Here are some of the operations that can cause measurement errors during the SX1280 ranging process:

As we saw above, the ranging process master generates an internal timer that counts the time-of-flight (TOF) of the ranging signal. When the slave synchronizes the ranging request, a known delay (processing time) is generated. If the clock frequency of the slave is different from the frequency of the master clock, the data will be inaccurate during calculation, which will cause a distance offset. The source of this error is called the frequency error.

When the ranging signal is transmitted and modulated by digital and analog signals, a certain delay (or distance) error is generated by the transmission and reception of the radio. Usually, this delay can be considered to be inevitable, which means that some compensation is needed for this delay in the calculation.

Another similar source of measurement error is the antenna delay, which is delayed by the signal transmitted by the antenna (or the received signal). Moreover, this delay may not be uniform because the delay produced in one direction of radiation may be different from the other.

In summary, based on the division of various error sources, we can conclude that there are two sources of error:

1. Fixed deviations caused by various specific delays, we need to give specific compensation

2. The deviation caused by an unknown variable, the master and the slave must be corrected according to the actual situation.

The E28 module ranging positioning does not need to involve GPS positioning technology, which can achieve the minimum size, the lowest power consumption, and the lowest cost. Can be applied to various industries and fields, such as warehouse logistics, animal husbandry, construction industry and so on.

Modern warehouses have become the logistics center of enterprises. Their role is not only the custody, but also the circulation of materials. Therefore, how to run modern technologies, such as information technology and automation technology to improve the speed and efficiency of warehousing operations is a focus of attention.

The E28 module can meet the positioning requirements of the storage system and form a real-time positioning system with low cost and low power consumption.