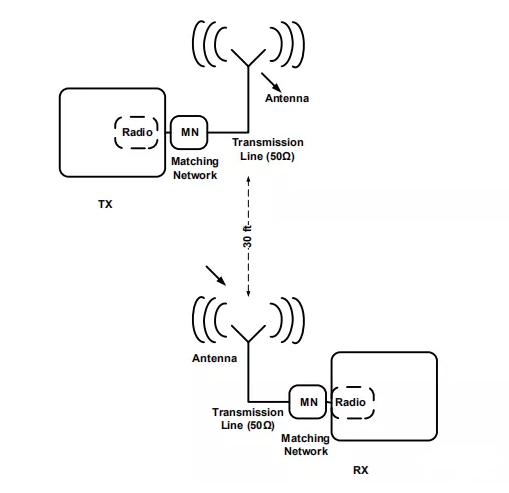 In order to ensure the transmission efficiency of the antenna, the length of the antenna is about 1/4 of the wavelength of the electromagnetic wave, so the lower the signal frequency, the longer the wavelength, the longer the length of the antenna; the higher the signal frequency, the shorter the wavelength, and the shorter the length of the antenna. The commonly used 2.4 GHz band has a high frequency, a short wavelength, a short antenna length, an internal antenna, and an external antenna. The antenna can be made shorter, such as 1/8 wavelength or 1/16 wavelength, but it can be used, but the efficiency will drop. Some devices use the "short antenna + LNA" method to achieve long antenna reception. However, in order to achieve the long-wave antenna transmission effect, the short antenna needs to increase the transmission power. Therefore, the intercom needs to transmit signals, which are long external antennas, and the FM radio only receives and transmits the antenna. For example, 2G (900MHz), 4G (700-2600MHz), WIFI and Bluetooth (2.4GHz), GPS (1.5GHz), these common IoT communication methods can be used as built-in antennas.

For small-sized products such as handsets, wearable designs, and smart homes, external antennas are rarely used, and built-in antennas are commonly used. The integration is high, the appearance of the product is more beautiful, and the performance is slightly weaker than the external antenna. Internet of Things, intelligent hardware products, to network transmission of data, you need to have an antenna. The smaller the space and the more the frequency band, the more complicated the antenna design. External antennas are generally standard products, buy the right frequency band, no need to debug, plug and play. For example, the express cabinet and the vending machine generally use a magnetic external antenna and can be sucked on the iron casing. These antennas cannot be placed inside the metal cabinet, and the metal shields the antenna signal, so it can only be placed outside. The advantage is that it is easy to use and cheap, and the disadvantage is that it cannot be used in small size products.

The working principle of the ceramic antenna is to use GPS satellite to realize navigation and positioning, and the main task of the user's receiver is to extract the pseudorandom noise code and data code in the satellite signal to further calculate the position, speed and time of the receiver carrier ( PVT) and other navigation information, the principle of ceramic antenna should be divided into two parts: one is the transmitting antenna, and the other is the receiving antenna. The general antennas are reversible and can be used as both a transmitting antenna and a receiving antenna. The ceramic antenna transmitting antenna simply means that a high-frequency electric field formed between the antenna and the ground is converted into an electromagnetic wave by an electrode called an "antenna", so that it can be emitted and transmitted to a distant place. The ceramic antenna receiving antenna simply means that an electromagnetic wave transmitted from the air is induced into an electric field by an electrode called an "antenna", and a high-frequency signal voltage is generated and sent to a receiver for signal processing. High-frequency, low-noise amplifiers are used in the design of ceramic antenna elements to reduce the thermal noise of the antenna and the influence of the previous stages of unit circuits on the performance of the receiver. The role of the ceramic antenna is to transform the electromagnetic energy of the radio signals transmitted from the satellite. The receiver electronics can take up the applied current, so the size and shape of the antenna is important because these determine the ability of the ceramic antenna to acquire weak electromagnetic signals.

Since the ceramic itself has a higher dielectric constant than the PCB board, the use of a ceramic antenna can effectively reduce the size of the antenna. In terms of dielectric loss, ceramic dielectrics also have less dielectric loss than PCB boards, so they are well suited for use in Bluetooth modules with low power consumption. The size of the ceramic antenna is generally equivalent to the 1210 package, and the effect is stronger than the on-board antenna. It is also convenient to use. Generally, there are ANT access pins and feet. When designing the PCB, the antenna must be cleaned around the antenna. Pay special attention to the fact that copper cannot be applied. At the same time, when using ceramic antennas, pay attention to the matching problem of the balun circuit. If a dedicated integrated circuit is used, it is best to let the manufacturer test the matching between the balanced circuit and the ceramic antenna. If the match is not good, it will also affect the effect of the antenna.

When using a PCB antenna, pay attention to the matching problem of the balun circuit. If a dedicated integrated circuit is used, it is best to let the manufacturer test the matching between the balanced circuit and the PCB antenna. If the matching is not good, it will affect the antenna. Effective PCB antennas are widely used in module boards on single frequency bands such as Bluetooth modules, WIFI modules, and ZIGBEE modules.

The advantage is that the space is less occupied, the cost is low, the antenna is not separately assembled, the touch is not easy to be damaged, and the whole machine is convenient to assemble, but the performance is sacrificed. The disadvantage is that the single antenna field type is difficult to round, the insertion loss is high, the efficiency is relatively low, and it is easy to be interfered by the main board; at the same time, it is only suitable for a single frequency band, such as Bluetooth, wifi; the performance of different batches of PCB antennas will be certain deviation.

Below are application on E73 series module

In particular, the E73-2G4M08S1C has a transmit power of 8dBm, which is a bit larger than other Bluetooth modules, so the transmission distance is slightly longer than that of other Bluetooth products.